I was tasked with recreating the braid from the front of the Kaftan of Bayezid II, Ottoman sultan from 1481-1512. The kaftan resides in the Topkapi Museum in Istanbul.

“What do you mean it isn’t tablet weaving its a braid?!” To start with I had never done anything but the most simple of fingerloop braiding and my teenage daughters hair. This was going to be a whole new adventure.

Let’s first start with the inspiration. Three caftans/kaftans with nearly matching silk braid on the chest. 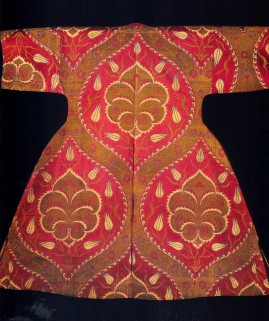 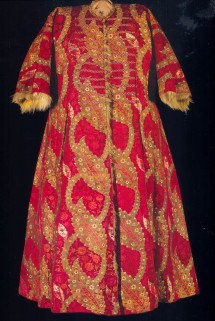 The first two pictures, as well as the close up’s of their  braids, were found on the following livejournal account, Ornament-i-stil. And have been the clearest pictures I have found of both. The one on the left is from Bayezid II, 15th century, and housed at the Topkapi Museum in Istanbul. The one on the right and below is from the 16th century as I have found listed on, A Wandering Elf’s blog also housed at the Topkapi Museum. The third is a child’s kaftan dated 1590 to Bursa, taken from an unknown royal tomb. The pictures for the child’s came from Mily Ryan and can be found on Clothworker’s Center 2018, London.

I have yet to find as clear of a picture for Bayezud’s kaftan’s braid, but they are nearly identical in appearance. As is the braid from the child’s kaftan seen below right, and the other Topkapi one, below left. It is interesting to note the different motifs in a single braid. The top braid in the right picture shows both chevron and the diamond that I am recreating. 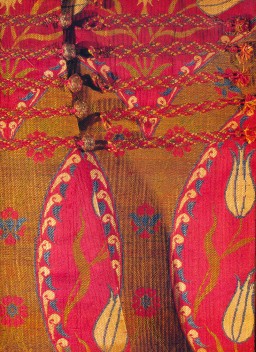 From here I went to the book “Fingerweaving Basics” by Gerald L Findley. The book has very clear line drawings which I found fairly easy to navigate once I got going following the instructions for Openface Weaving/Plain weaving.

From looking at the above structure I knew I should easily be able to make the diamonds appear as on the original braid. 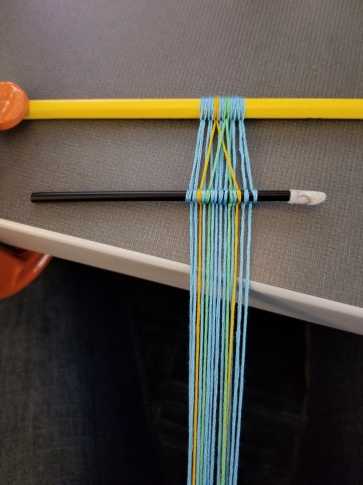 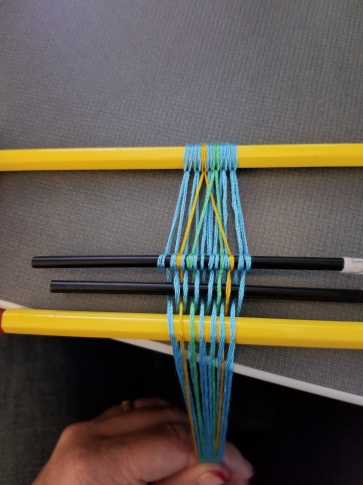 I completely guessed at the number of silk threads to use. I had no technical knowledge of the braids to go by for size or ply, etc. I started my practice with Madeira embroidery floss because I had it lying around. 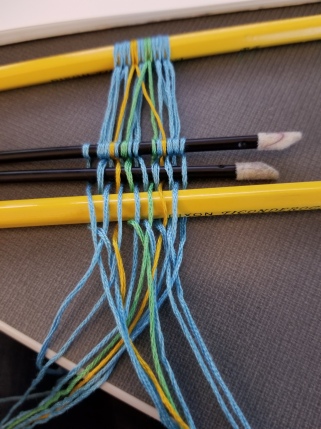 The set up above as demonstrated in the book seemed excessive with dividers. I did so for the practice, but greatly cut that down later. 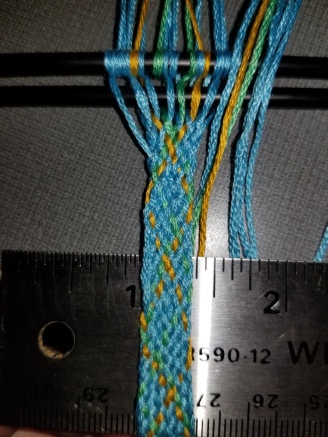 SUCCESS!!! I had a braid that looked approx the same width as the extant braids, and they seemed to have about the same amount of threads, causing 6 gold spots from one side of the braid to the other.

I am using a two ply silk yarn By Vineyard Silk. Their Classic line is described as a non-strandable Chinese silk. And appeared to be just slightly larger than the Madeira silk I used in my practice braid. And I have chosen colors that seemed to follow the theme of all three kaftans, where the main color would almost blend with the background silk fabric, which in this case is green. All three have a striking accent color and a muted secondary accent number. I chose gold to stand out and brown in a complimentary tone to the green. 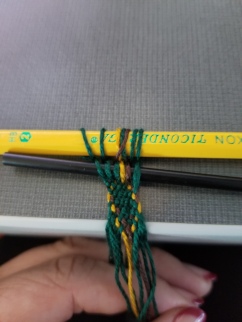 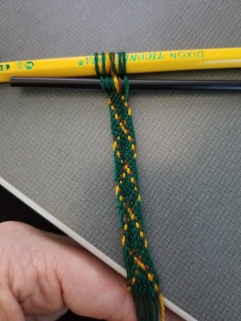 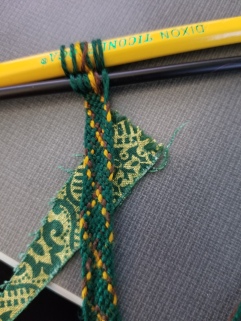 Above you can also see that I greatly cut down on the set up dividers. I needed the starting excess to be the right size to create buttonloops, seen below. I wanted a clean smooth buttonloop, and I had not yet seen any super clear pictures of the existing ones. I simply did one half hitch after another until I was completely around the entire loop. This way the hole can be stretched a bit, or closed with the tails that I left for a smaller hole, since I didn’t know the size of the buttons. 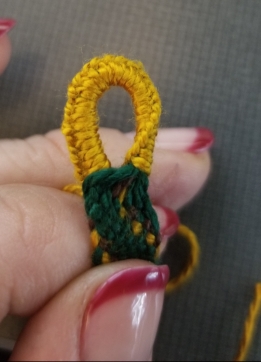 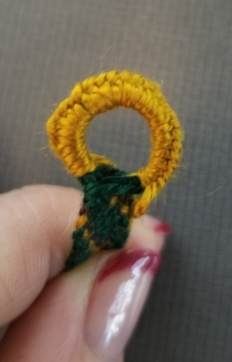 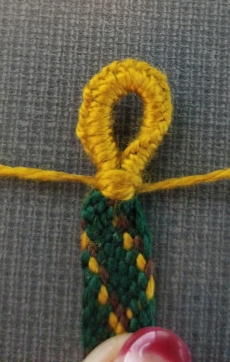 Of course as soon as I decided how I was going to do the buttonloops, and had two completely I found the child’s kaftan that clearly showed what they looked like, shown below, I think that it is just straight up 3 strand braiding from the look of it, and so I experimented with one myself. 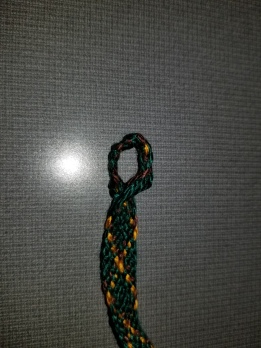 Of course I then wrapped it so that all of the button holes would match. One of the others also shows a completely different color of plied yarn creating the button loop.

Below is a close up of my first one that would be used on the garment. 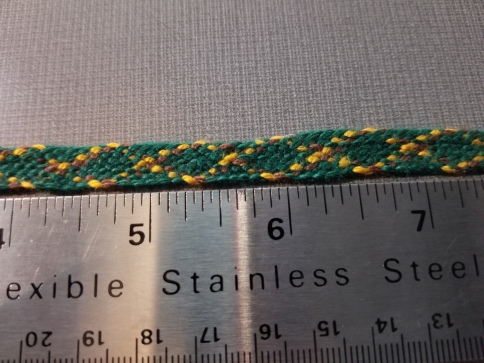 I was very frustrated by the unevenness of my diamonds. Then I noticed that the extant ones also were not all perfectly even, and they were mostly uneven in the same direction as mine. Making me realize that it is a result of the process, not the fact that it is a new art for me. 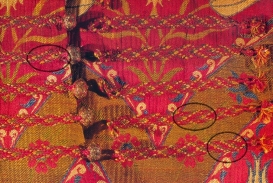 I won’t be putting the finishing touches on these bands as they will be applied to the garment by someone else, but it’s important to note that we do have some great pictures of the frayed ends from the child’s kaftan. I believe this is how they will be finished once applied.

I’ll be posting a few more pictures later on, when I have all 12 completed, and when they are worn by the Royal they are made for. In the mean time if we can not share this too widely lest he see it, I will not be posting it anywhere publicly currently. It can be shared on a more person to person basis. But I did want to get my thoughts “to paper” and get it out there while it was fresh.

One thought on “Braided Trim from Ottoman Kaftan 15th Century”

This is a text widget. The Text Widget allows you to add text or HTML to your sidebar. You can use a text widget to display text, links, images, HTML, or a combination of these. Edit them in the Widget section of the Customizer.